4 Cultural Highlights of Palau You Should Experience

The people of Palau, like other countries in Micronesia, have a rich culture whose roots are almost lost in time. Like other cultures elsewhere in the world, it is slowly disappearing. The culture of Palau is one that has most anthropologist confused.

It is believed the first residents of Palau were from South East Asia or Indonesia, most likely Lapita with a mix of other peoples. These long-distance navigators seemly arrived 3,000 to 4,500 years ago, liked what they saw and stayed.

The first settlements are believed to be in the Rock Islands. Finally, inter-tribal warring led these settlements to move to Babeldaob. Over time, they lost the desire and the knowledge of open ocean navigation and became experts on the territorial seas and the different seasons that come with it.

These early settlers add another mystery to the origins of Palau. In some parts of the island, the land has been terraced for agriculture. Unlike the similar terraces in the Philippines that were built up over hundreds if not thousands of years, these seem to have been made in a single large effort and in a much shorter time frame.

Carbon dating the material below the surface has been inconclusive as to when these terraces were developed. Some pottery shards test older than when the islands are believed to be inhabited, in fact, they date to some of the oldest in the world.

Another mystery for science is the Udoud

The Udoud is a monetary system that existed long before the first Europeans reached the area. This “money” was in the form of pottery and glass beads, items that could not be made from local material.

Each piece belonged to a class and had its own name and village elders would know the history of each piece within their clan. If you are interested in this sophisticated system, you will find this article, Money Walks, People Talk-Systemic and Transactional Dimensions of Palauan Exchange interesting.

To get a glimpse of the island nation’s culture here are a few things to see or do on a non-diving day: 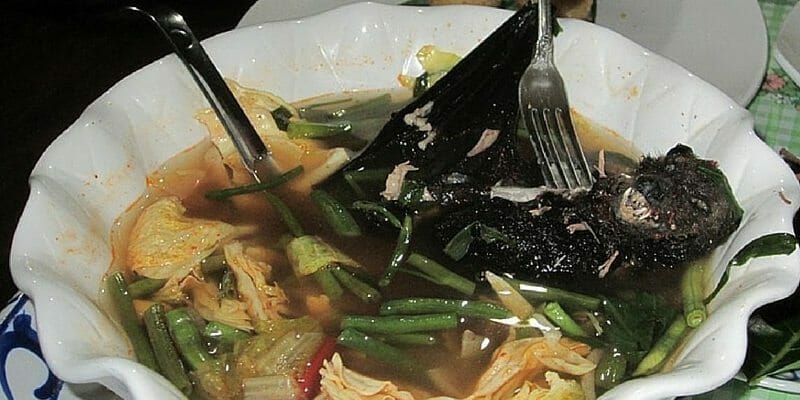 Fruit bat soup or flying bat soup is found in many parts of Micronesia. Palau has a small fruit bat that is only found in Palau. While most bats eat insects, fruit bats only eat fruit. In earlier times it was a part of the staples of the locals diet. However, it is now more of a delicacy. If vampire movies freak you out, then Fruitbat soup is not for you.

The soup is made by washing a bat and putting it in boiling water, fur and all. After cooking it for a while, it is taken from the water and then cooked with coconut milk and ginger. Other spices are also added and sometimes vegetables depending on the cook.

It is served in a large bowl with the whole bat looking up at you. Some people will try to skin the bat removing the fur to get the meat, but the proper way is to chew it, sucking out the meat and then discarding the remaining fur.

This species of fruit bat was being exported to Guam, but the demand was so high the species was in danger of extinction. In 1994, it became illegal to export the bats. The numbers have since improved, and the conservation society is confident that the current population is sustainable for domestic consumption only.

Villages were made up of clans, a type of extended family. Clan leaders and the village chief would meet in the village Bai the traditional meeting house for the men. A village would have three of these buildings each of a different size. Each was similar except in size.

Bai were made of thick planks and above the entrance was carved ironwood with a painted set of symbols, most related to Udoud and the symbol of man.Inside the beams were also cut showing stories from Palau’s mythology.

While the largest buildings were for the clan leaders and other influential men, the other Bai was for younger men and those seen as not as important. While the topics in the largest one dealt mostly with the running of the village, the second one was more about learning task such as hunting and making canoes. The smallest Bai was used for the private meetings between those of different levels.

The responsibilities of men and women of the clans and village were clearly understood.

Men did the fishing, hunting, and canoe making. Women took care of the family and did the farming. Farming was mostly Taro, but it did provide a stable source of food.

While the Bai could give the impression that men ran everything, it not that simple. The Matriarch of a Clan selected the leader of their clan, and from the clan leaders the other matriarchs would choose the chief.

Clan leadership was at the discretion of the matriarch. Also, a husband had to pay his wife for her labor and services. Raising children was the responsibility of the women of the clan, but there would also be one “uncle” who acted as the father role. 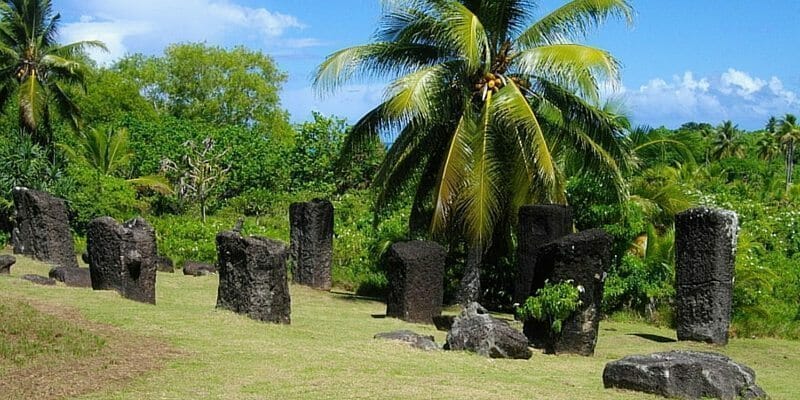 Located at the northernmost point of Babeldaob you will find a series of stone monoliths. Legend has it these were placed there by a god to support the building of a Bai to hold all of his people.There are two columns of refrigerator-sized basalt monoliths, some with carvings of faces.

Basalt is a volcanic rock and Babeldaob is the only volcanic island in Palau. However, there is no Basalt near the surface of the island. The monolith has been dated to 161 A.D., raising the question further, where are they from and how did they get there?

Find a storyboard to bring home 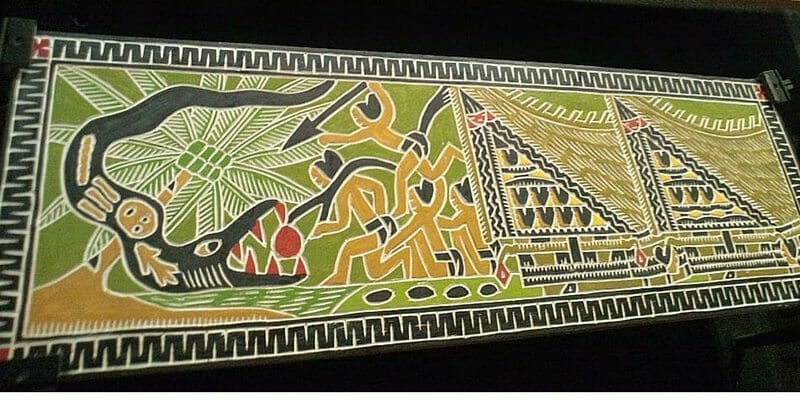 A Japanese artist in the 1930s brought the concept of the storyboard to Palau mainly for Japanese tourists and workers to take home with them. The storyboards, however, are seen by many as an extension of the beams found in the traditional Bia.

Like the beams, the storyboards are a graphic representation of the culture and legends passed down for centuries. Each is done by hand working from a sketch. The drawings were made with the help of elder storytellers.

There are many different aspects of Palau’s traditional culture. These tips include just a small part but should be enough to get get you excited about Palau.