One of the attractions of Palau you should not miss on your vacation is a visit to Peleliu Island. This seemingly peaceful island was the venue of the battle of Peleliu which became one of the bloodiest battles in the Pacific during WW2, and even today, many artifacts let the tragic history of the Island of Peleliu come to life. 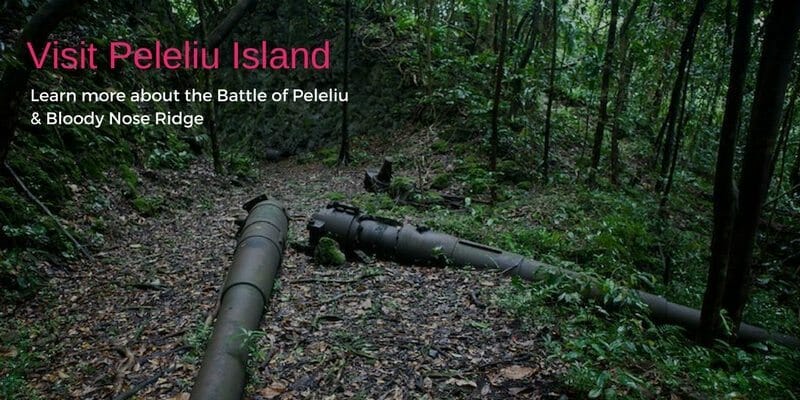 Here is an overview of the horrors that have taken place on this peaceful little island in the Pacific.

Peleliu Island is lightly developed, and approximately 700 people live on the island permanently. At first glance, nothing gives away the tragic battle that has taken place here in 1944 during WW2.

No resorts, just a museum that tells the painful story of the role Peleliu Island played for a short time in WWII during the Battle of Palau. It is about a 1.5-hour boat ride from Malakal harbor, through the beautiful Rock Islands that have made Palau so famous.

The lush jungles hide a terrible history about one of the bloodiest battles of the Pacific War: Operation Stalemate 2. When you take a tour around the Island, you are warned to stay on the marked trails, as unexploded ammunition still can be found in the jungle.

Also read: 4 Cultural Highlights of Palau You Should Experience

From the tracks, you can see rusted out remains of tanks and artillery pieces. Further, up to a coral ridge, you will find caves that hide thousands of Japanese soldiers during the battles. For some visitors, it is the “cool” thing to do, for military history buffs it represents connection, but for the families of the over 13,000 killed and the over 8,500 wounded it can mean closure. When visiting Peleliu, please bear in mind that people have lost their lives here. 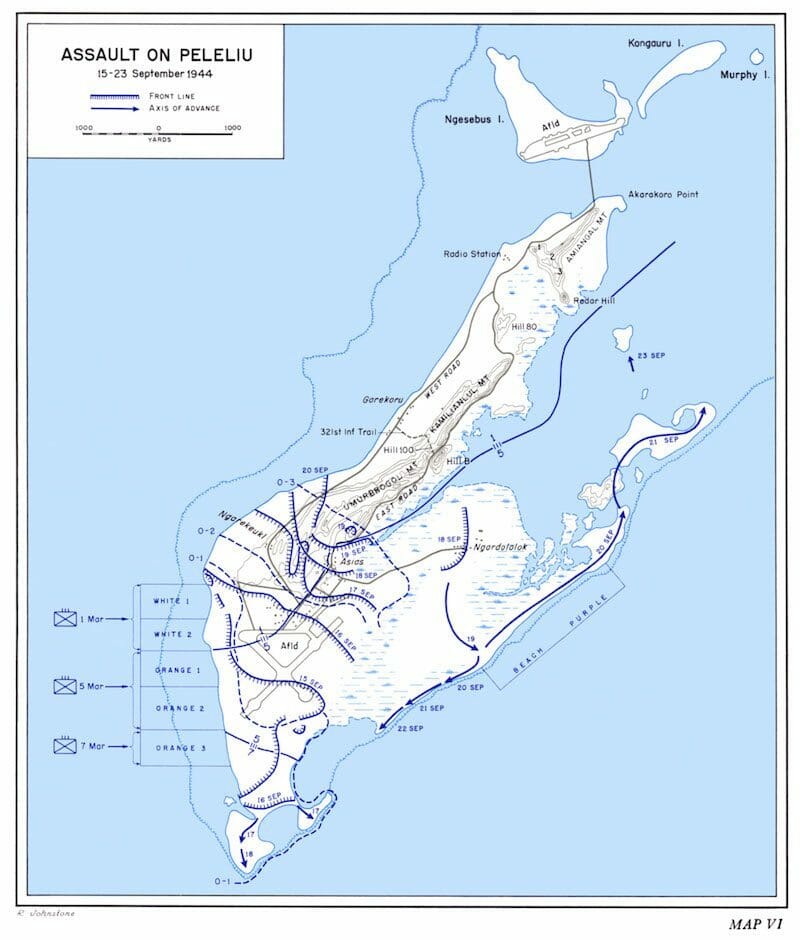 3. The Battle of Peleliu aka Operation Stalemate II

A Japanese observer looking out in the early morning hours of 15 September 1944 would have seen a massive naval force landing U.S. Marines onto the beaches of Peleliu Island. And thus the Horror in the Pacific 1944 begins.

Smoke filled the air from the intense bombardment that started at 05:30. This was no sneak attack. The U.S. Navy knew that there might be as many as 11,000 Japanese troops on the island, troops that had been there for a long time and were well entrenched.

The U.S. Navy started with ten days of aerial strikes followed by two days of Naval bombardments. The third day was canceled as it was declared there were no enemy targets left on the Island. They were horribly and tragically wrong. The 1st Marine Division was conducting the assault with the 1st Regiment to the north, the 5th in the center and the 7th to the south.

The mission of the 5th was to press across and capture an airfield, and the other two were to protect the flanks. When successfully executed, this tactic would split the island allowing troops to drive from north to south. Major General William Rupertus, who oversaw the operation, told his troops it would be a hard battle, but it would be finished in two days, four at the most.

The early ceasefire of the naval bombardment bolstered this belief in both the leaders and the troops. They were wrong with the island not being secured until 27 November 1944. (3 months later). 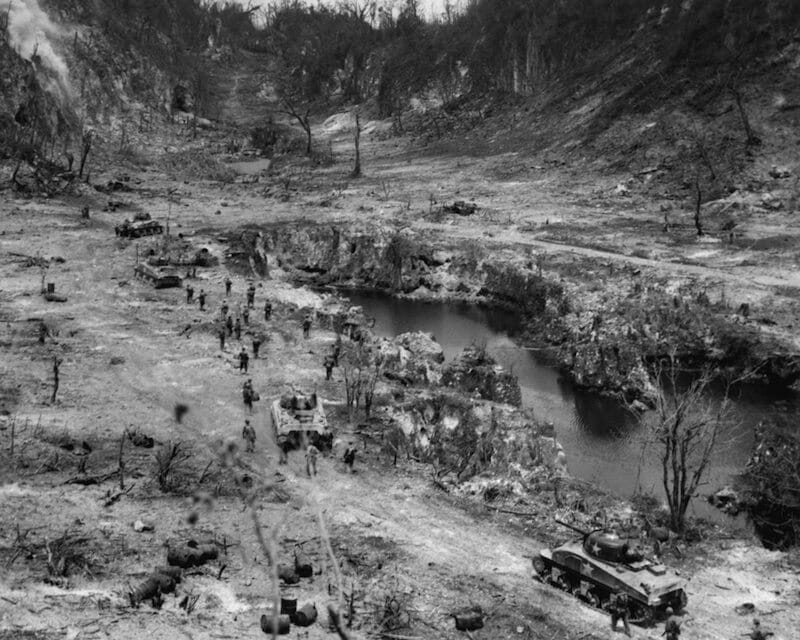 Unknown to the U.S troops, the Island had a bunker system with over 500 caves and tunnels allowing Japanese troops to relocate at will using old mine shafts to store ammo.
The intense bombardments of the first two days did little damage.

Landing troops came under fire from artillery and anti-boat defenses. Deadly accurate fire from well-ranged guns, guns hidden behind steel doors. The doors would open, rounds were fired either at the troops or the ships, then closed before a long-range shell could reach them.

Most of these fighting positions and the caves were on the 300-foot-tall Umurbrogol Mountain. This coral “mountain” was not foreseen as the area was so densely hidden in vegetation that observation photographs could not judge the difference in elevation.

Also read: 10 Amazing Palau Points of Interest You Should Visit When On Palau

Some guns and artillery were placed within coral outcrops called “The Point” at the end of the beach bringing direct fire on the landing troops. These firing positions were hard to see and hard to attack. The only thing visible was a small slit for the gun barrels.

Some of the landing crafts could not make it over the shallow coral reefs, and troops had to wade 100s of meters ashore, while under attack. Also unknown to the Americans, the Japanese had discarded the “banzai charge” style attack. In previous battles, Japanese would command to fight in hand to hand combat to keep the landing parties from getting to the beachheads.

The Umurbrogol Mountain was nicknamed “Bloody Nose Ridge.” The attacks on the island before the landing action had destroyed almost all the vegetation on the ridge. This meant that advancing troops had no cover. Even worst was the fact it was a coral ridge and tough, nearly impossible, to dig in, so digging a fox hole was out of the question. 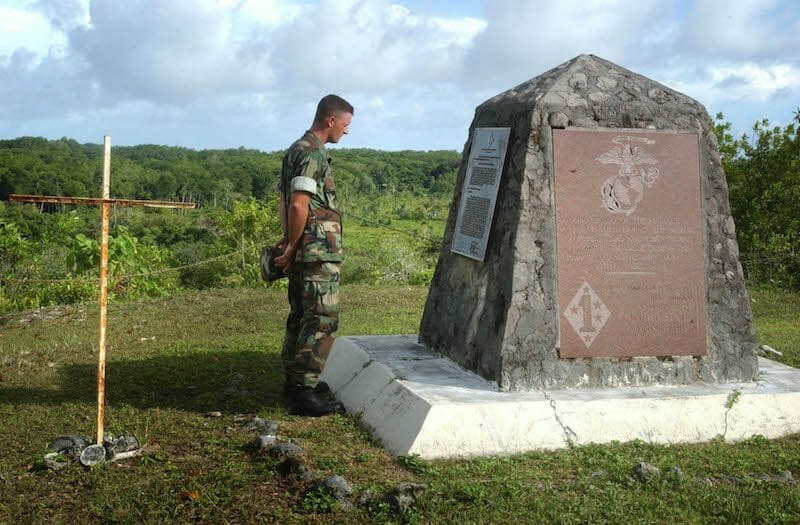 5. The outcome of the Battle of Peleliu – casualties

“Postwar statisticians calculated that it took US forces over 1500 rounds of ammunition to kill each Japanese defender and that during the battle, the Americans expanded 13.32 million rounds of 30-calibre, 1.52 million rounds of 45-calibre, 693,657 rounds of 50-calibre bullets, 118,262 hand grenades and approximately 150,000 mortar shells.”

Also read: Explore the Lost Fleet of the Rock Islands

The number of casualties on the American side was much lower than in other landing operations. However, the percent of casualties were very high. By the time the battle was over, The 1st Marine Division had sustained about 35% causalities.

It did not become operational again until the following April. The 1st Regiment who was responsible for the attacks on “The Point” and “Bloody Nose Ridge” received 71% casualties. K Company started the battle with 195 men, only 18 survived. The Japanese fought to the very end. Of the almost 11,000 men only 202 were captured. Of this number, only 19 were Japanese.

A visit to Peleliu Island is fascinating since there are so many reminders of the battle of Peleliu and the WW2 strewn across the jungle.

Only rarely is it possible to dive into history with so many visual clues to help you picture the atrocities of war.

When visiting Peleliu Island you might feel a little bit like Indiana Jones, but please remember that this is not the set of a movie, but many people have lost their lives here, and some of the locals might have lost a family member during the fierce battles, so please make sure respect their losses and the tragic history of the place when visiting.

Would you like to explore Peleliu island with us? We offer land tours usually on Saturdays and we dive the stunning reefs surrounding the island on Thursday.
Please feel free to contact us directly if you would have any questions. We love to hear from you.