Updated December 13, 2018: Jellyfish Lake in Palau is open to the public again!

Ongoing monitoring conducted by the Coral Reef Research Foundation (CRRF) indicated that the jellyfish populations were now rebounding after the declines that were a result of the drought conditions experienced throughout Palau in 2016.

Similar conditions were experienced in 1998 which also decimated the populations of jellyfish but eventually recovered fully as conditions returned to normal. One of many marine lakes throughout the Rock Islands Southern Lagoon (RISL), the unique environments found within these ecosystems were a strong argument for the inscription of the RISL to be a World Heritage Site.

Based on the current conditions and the continued recovery of the site, it was determined that Ongeim’l Tketau or Jellyfish Lake had sufficient numbers of jellyfish to provide visitors with a quality experience.

Similar to 1998, site managers are confident that the populations of jellyfish will make a full recovery and monitoring data from CRRF supports this expectation. While the jellyfish lake is open, management will continue to integrate appropriate safeguards to ensure the protection and sustainable use of this unique site.

In this article, we will dive deeper into the probable cause why many of these harmless jellyfish vanished!

Where is Jellyfish Lake?

What is the Golden Jellyfish?

To understand what happened, we should have a look at this unique species and its habitat. The Golden harmless and stingless Jellyfish are most closely related to the Spotted Jellyfish that has almost no sting and lives in the lagoons of Eil Malk Island. Millions of years ago, when Jellyfish Lake got separated from the ocean, the Palau Jellyfish completely lost all their stinging capacities, resulting in an entirely harmless jellyfish with no sting living in a completely isolated lake.

A meromictic lake has layers of water that do not intermix. In ordinary, “holomictic” lakes, at least once each year, there is a physical mixing of the surface and the deep waters.

Here is how you create your own Meromictic lake
Take one 3/4 full bucket of dirty water and leave it to sit somewhere sheltered out of reach for one week. If it’s left undisturbed, the sediment settles. What you get is your miniature version of a Meromictic Lake.

So what? You might ask, but I am going somewhere with this. So instead of having one three-quarter of a bucket, you now have a volume of approximately 94 million buckets and leave it to settle on an island in the central Western Pacific for 12,000 years or so. Here you have the famous Jellyfish Lake in Palau.

Watch this excellent Jellyfish Lake video and see for yourself why Jellyfish lake in Palau was a legendary place and a must see for everyone visiting Palau. As of November 2018, we have resumed our tours to Jellyfish Lake.

A Meromictic Lake such as Palau’s Jellyfish Lake is one that does not get mixed as a typical lake does. Turbulence that disturbs the sediment rarely exists, and the wind is only causing minimal ripples on its surface.

Given enough time these lakes develop layers within that suspension of dirt. Dense particles fall faster than less dense ones. Chemicals even separate and react with each other within their layers so that distinct biological boundaries develop.

Meromictic Lakes are exceedingly rare, Meromictic Lakes that have 20 million non-stinging jellyfish living in them are even rarer. So how would you survive in a big bucket of dirty water as a Jellyfish?

You need to be smart to survive in Jellyfish Lake

These harmless Jellyfish have survived and done so in an incredible way for such a long time. They have live algae within their bodies that, just like plants, photosynthesize in sunlight. The algae produce what is essentially a form of sugar which the Jellyfish, as an animal, metabolizes. This is how they gain the energy to propel and migrate through the water, grow and reproduce.

Waste products from the metabolic process, in turn, provide in combination with sunlight what the algae need to produce more sugars.

So, what you have is an animal that carries its own farm, providing its food. This very simple exchange is the obvious remedy to finding yourself in a huge bucket of dirty water in the tropics.

As long as the jellyfish stays in the sunlit water, it’s algae will provide it with food. How idyllic might you say, oh to be a Jellyfish? However, it’s not all Paradise in Palau for them.

Also read: How to Get to Palau? | 7 Gateways to Get You into Palau [Infographic]

Firstly, they sink, so they must keep swimming always to stay in the sunlight. Secondly, the sun moves across the sky, and the jellyfish need to optimize the amount of sunlight their algae get: the more sunlight, the more energy. So as the sun moves, so do they.

People often ask “do jellyfish migrate?’ Yes, they do. The Jellyfish migrate over a daily cycle through the lake. There is a continuous jellyfish migration going on. The sun rises in the East; they swim to the East end of the lake, the sun passes overhead and sets in the West, the jellyfish swim towards the West. When the sun sets they sink about 15m into the depths where there are layers of Hydrogen Sulphide, completely devoid of Oxygen, which would pose a serious threat for scuba divers.

The Jellyfish instead, absorb vital trace chemicals before swimming back up towards the lightening sky before dawn. It doesn’t matter where you live on this planet; the sun rises at a different point on the horizon every day of the year. Think about Stonehenge for instance.

Also read: 10 Amazing Palau Points of Interest You Should Visit When On Palau

Beware of the Dark Side – threats and predators

This migration is a spectacular biological phenomenon. Additionally, the jungle that surrounds and shelters the lake from the wind also casts its’ shadows upon it, creating a sudden barrier, a “no-go” zone of no-light if you will. The Jellies actively avoid these dark areas once they get there.

It’s not as simple as that though because in some other sections of the lake lurks death. Yellow and orange sponges compete with multitudes of white anemones for space on the walls of the lake. Nestled in and amongst them are thousands of bivalve mussels each the size of a dime. This is Jellyfish Lake prime real estate.

And this is also where the Jellyfish have to pass each day on their way from East to West. The anemones concentrate at the bottleneck, and if a Jellyfish becomes entangled in the sticky tentacles of the Anemone, it will be eaten alive. In some areas of the lake, trees have fallen exactly where the sunlight draws the Jellyfish. 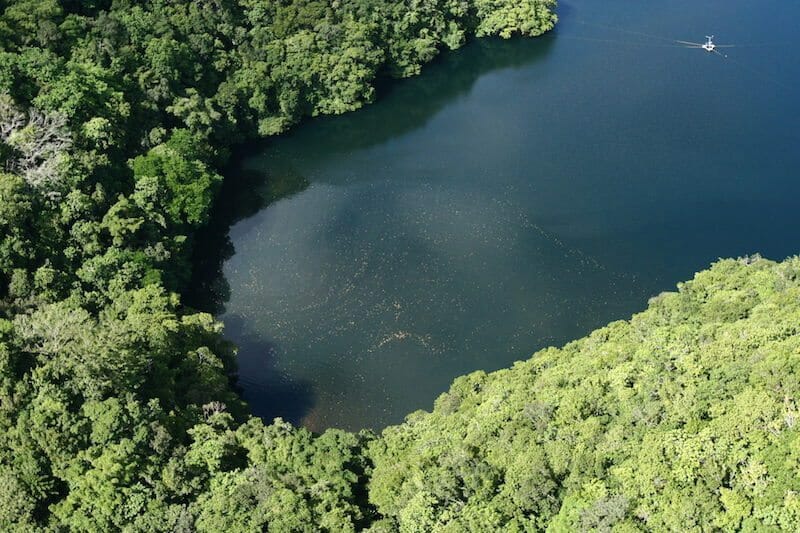 Also read: 5 Reasons to Use a Reef Hook When Diving in Palau [Infographic]

During certain times of the year, the sun rises and shines its light over a section of the lake where a tree and its anemones wait. The result is nothing short of spectacular. All this passive predation is a daily thinning of the numbers. If there weren’t any anemones here, the jellyfish population would theoretically explode only to be regulated by something else.

What might have caused the harmless jellyfish to vanish?

Scientists have found out, that it was not a lack of sunlight that has caused the harmless jellyfish population to dwindle in recent years. The problems seem to be an increase in salinity of the saltwater lake, due to the ocean warming weather pattern what is commonly known as El Niño. Palau locals also attested to the fact, that the drought of 2016 had been the worst of the past 65 years. This severe drought combined with the effects of El Niño seems to be one of the main reasons that millions of Golden Jellyfish now have vanished.

As of November 2018, we have resumed our tours to Jellyfish Lake.

Please feel free to contact us directly if you would have any questions. We love to hear from you