This is How We Handle Poachers in Our Marine Reserve

Palaudiveadventures » This is How We Handle Poachers in Our Marine Reserve

This is How We Handle Poachers in Our Marine Reserve

Palau has realized that illegal fishing fleets were just not getting the message. Illegal fishing in Palau is not acceptable. Boats have been seized, stripped of their fishing gear and cargo, the captain fined, and still it continued. 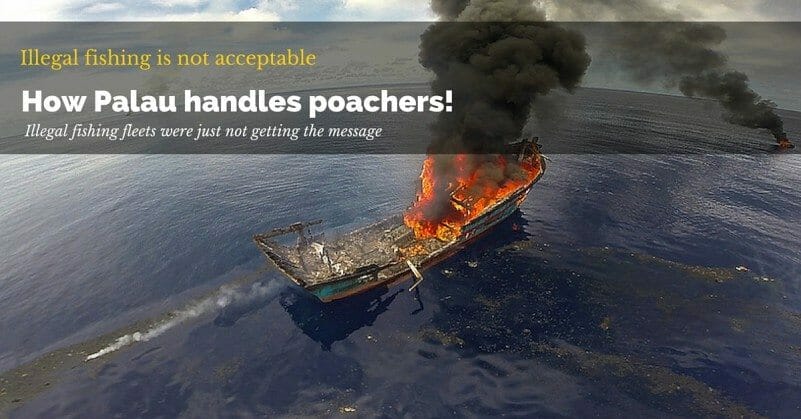 A fine of $100,000 was levied against a Taiwan company in January, but still they keep coming. Much of it has to do with the rewards against the risk of being found and the amount of the fines.

The waters of Palau are rich in marine life, not as overfished as in other locations and it is easy to avoid detection.

In June, a small fleet of 6 Vietnamese blue water fishing vessels were found fishing in Palau. On board were eight metric tons of sea cucumbers and reef fish.
The tactics of these fleets were to sneak into reef areas and plunder what they could and then slip out to deeper waters where they are less likely to be seen.

The government followed the same procedures they have done with the other nine boats seized this year.
They brought the fleet into port. They removed and destroyed the fishing gear, removed the cargo and placed the captains under arrest.

They then released the fisherman and sent them on the way home. This time, however, there was a twist. Only two of the six vessels were supplied with fuel and provisions for the 77 fishermen to get back to Vietnam.

Also read: Palau’s Declares All its Waters to A Giant Marine Sanctuary

The six vessels, two manned and four unmanned, were escorted away from the port towards Vietnam. In deep water, the fisherman witnessed the destruction of the four empty vessels. The vessels were set on fire and allowed to burn until they sunk. The message was sent.

“We have a simple message for those who try to steal Palau’s marine resources: We will not tolerate poachers in our ocean.

Palau is working with our military, diplomacy, and NGO partners from around the world to get tough on illegal fishers and protect our food security,”. Said President Tommy E. Remengesau Jr. “When the Palau National Marine Sanctuary becomes law, it will be even easier to deter, detect, and interdict pirate fishing.

Palau is simply no longer an option when it comes to poaching. This message goes to the captain and crews of these vessels. Palau guarantees, you will return with nothing. Captains will be prosecuted and jailed. Boats will be burned. Nothing will be gained from poaching in Palau.

No government has condemned the sinking of the boats, in fact, the international tribunal has even endorsed the practice in the past. They have ruled that the government capturing illegal fisherman have the responsibility to take actions so that the fisherman do not continue their illegal practices.

The Vietnamese government has made no comments concerning the ships being burned and have not even sent a representative or interpreters to the detained captains.

This year they have sunk 41 illegal fishing vessels having their Navy taking them out and firing upon them. In April, President Remengesau hosted a three-day Marine Domain Awareness Workshop. It was a significant influence on the comments he made after the sinking of the four boats. The workshop had representatives from the U.S. and Australian Navies, U.S. Coast Guard, NGOs and different departments of the Palau government.

“The Palau National Marine Sanctuary will have a world-class enforcement strategy that makes use of the latest technology,”

President Remengesau said on the workshop’s opening day. “Enforcing the sanctuary’s boundaries will be less complex than the current challenges presented by the tuna fisheries, which means it will be easier to stop criminal activities and protect our natural resources. This sanctuary protects our beautiful ocean environment and enhances our national security.”

The firing of the illegal fishing boats can be seen as the opening salvo in the new war against IUU fishing. Nets and rigging are not cheap to replace, still, they are easily replaced from the profits of previous catches.

Replacing a fishing vessel is a much more expensive and time-consuming process.

Now that the Palau National Marine Sanctuary Act has been passed, the tuna fisheries and other legal fishing will be phased out. As legal fishing decreases, it will be easier to identify who is not legal. The fines to be levied against illegal fishing have been greatly raised. The enforcement strategy will shift the risk of detention

The enforcement strategy will shift the risk of detention to the government’s favor. Palau had taken extraordinary steps to protect its environment when it created the shark sanctuary and then expanded it to marine mammals.

The total protection of marine resources under the Palau National Marine Sanctuary Act is even more bold. However, the steps they have and are taking to protect that Marine Sanctuary brings hope that they will be successful, and they will stop IUU fishing in their waters. And if tiny Palau can do it so can everyone else.