If you are planning a trip to Palau and or any other location in Micronesia you should be aware of a critical shortage of water that is developing in the area. Because of the drought in Palau the government declared the State of Emergency, however, Governments in the Marshall Islands, the Federated States of Micronesia and the nearby southern portion of the Philippines have also issued emergency or disaster declarations as water reservoirs and rivers are drying up. 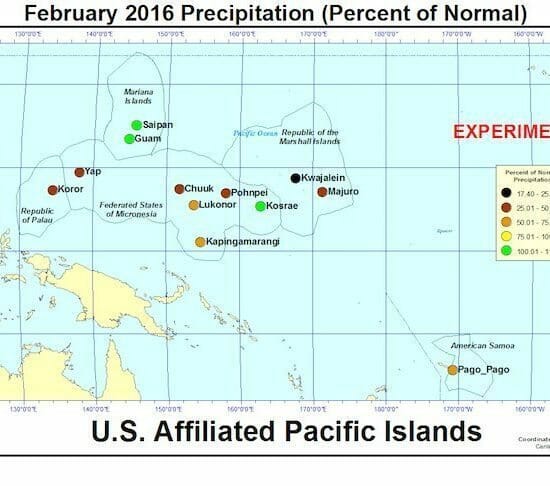 The drought in Palau is caused by El Nino.

El Nino brings above average rainfall to the western coast of the United States with the reverse happening in the western Pacific.While El Nino is a repetitive pattern, this one has resulted in the lowest rainfall since 1951. The rainfall in March was just one-third of the normal rainfall The worst is that this pattern has already past the point of having the longest duration, and it will last possibly another two months.

NOAA has produced an information sheet on El Nino patterns for Palau.

Palau has also called on the United States Military to provide desalination equipment. This may help with the water supply but will not solve the current problems.

Currently, the island of Koror, which is where the majority of the country’s population lives and the center of its growing tourist industry is located, has water rationed providing water only 3 hours a day.

The primary source of water is the Ngerimel Reservoir, and it is below the 19% level, and the low level in the reservoir is also causing an increase in the salt content giving a salty taste to the water.

Schools in much of the country have reduced the school day to half day because of the lack of water for drinking and hygiene purposes. The medical community and international health organizations are gearing up for health issues caused by the unhygienic conditions that are presenting themselves.

Some other problems are come up related to drought in Palau.

Koror does not have the fresh water reserves to refill the firetrucks in the case of a severe fire. While salt water could be used, it could lead to the pumps being ruined. Fresh water is also used to cool the power generation equipment producing electricity for the island’s power grid. A further drop in water levels will result in power generation equipment being shut down leading to potential extended power outages.

Vegetation on some of the Rock Islands is turning yellow and is starting to die. Food crops are at below average production, and massive die-offs are possible. El Nino has also caused a drop in sea level. This can lead to a coral bleaching event. The famous Jellyfish Lake has a lower water level which is starting to impact on the Jellyfish. In 2001, the water temperature in the Jellyfish Lake went up causing a massive die-off that took six years to recover.

If you are planning a trip to Palau in April, May and possibly June, expect water rationing at the hotels, use will be limited to morning and evening hours. Fresh drinking water is no problem the stores have still plenty of bottled water, and we have water stocked for our guests and us as do the hotels.

The hotel right now best prepared for this drought is Palau Pacific Resort because of the backup deep wells they have. Therefore our advice for travelers who come to Palau between April, May, and June, to book accommodation at the Palau Pacific Resort.

We have suspended our towel service as well, but all our trips are all running as scheduled. We recommend bringing water purification tablets as a precaution on your journey to Palau in the coming months. Please email us for the latest updates and any concerns you have.